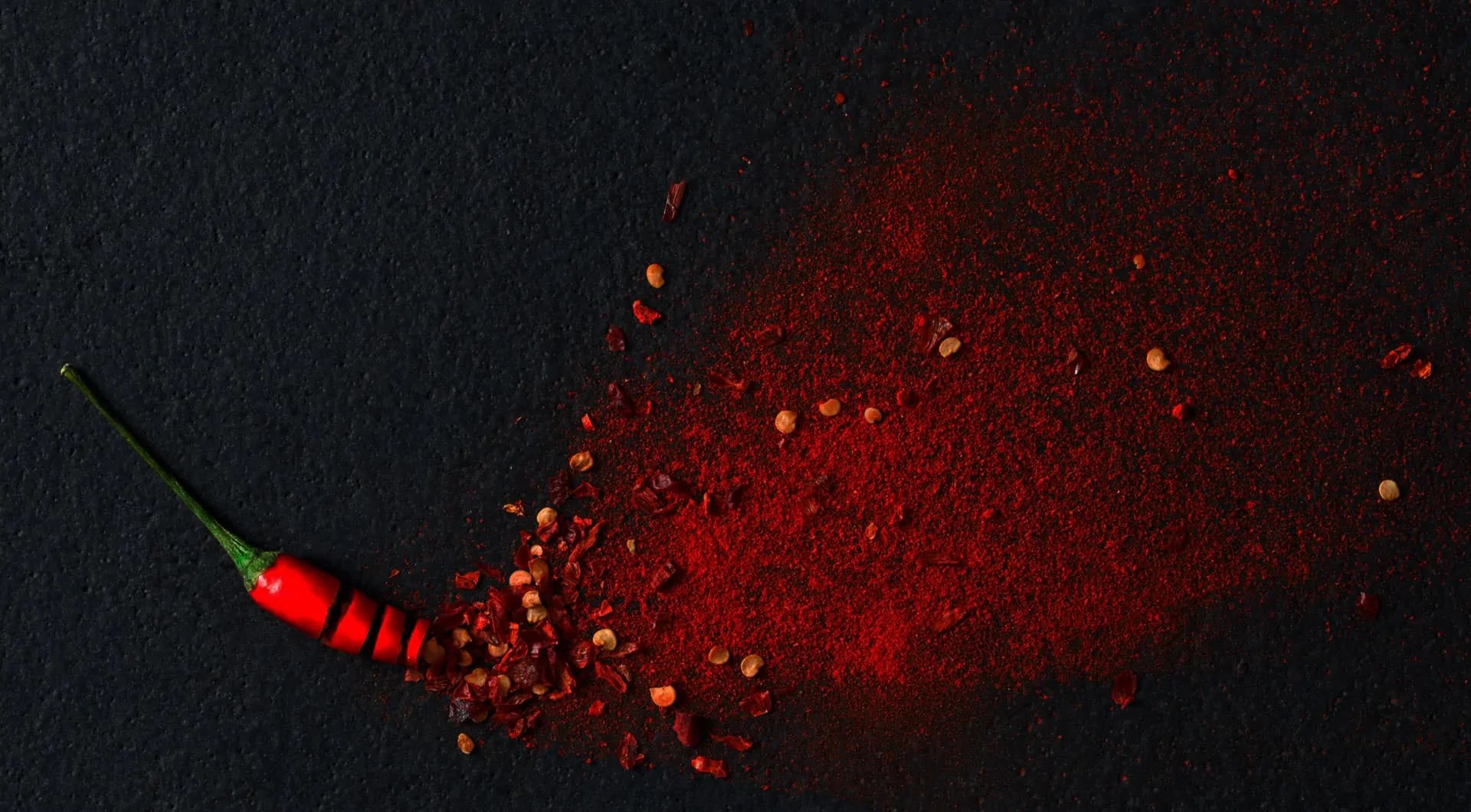 The Red Chili Pepper, also known as chili pepper or chili is the fruit of plants belonging to the members of the family Solanaceae. This is the plant that sets your tongue on fire and maybe even makes your eyes and nose run when you eat spicy Mexican, sizzling Szechuan, smoldering Indian, or scorching Thai food.

About 30 varieties exist with brightly colored, mostly spicy, fruits. Chili peppers are widely used in many cuisines to add spiciness to dishes. The substance that gives chili peppers their pungency is capsaicin. The hotter the chili pepper, the more capsaicin it contains.

Capsicum fruits have been a part of the human diet since about 7,500 BC, and are one of the oldest cultivated crops in the Americas. It’s not surprising that chili peppers can trace their history to Central and South America, regions whose cuisines are renowned for their hot and spicy flavors. Chili peppers have been cultivated in these regions first as a decorative item and later as a foodstuff and medicine.

It was not until the 15th and 16th centuries that chili peppers were introduced to the rest of the world. Christopher Columbus encountered them on his explorations of the Caribbean Islands and brought them back to Europe. There, they were used as a substitute for black pepper, which was very expensive since it had to be imported from Asia.

Addition of spices to food helped prevent spoilage in warm climates before the invention of refrigeration. Capsaicin’s anti-microbial properties inhibit as much as 75% of bacteria growth. Recipes of food preservation consisting of chilies have been passed down from generation to generation for hundreds of years.

Chili peppers are now grown on all continents. Today China, Turkey, Nigeria, Spain and Mexico are among the largest commercial producers.

The documented health benefits of hot peppers continue to grow, as does the increasing popularity of consuming hot foods in various forms. The heat and health benefits come from a chemical called capsaicin.

Red chili peppers, such as cayenne, have been shown to reduce blood cholesterol, triglyceride levels, and platelet aggregation, while increasing the body’s ability to dissolve fibrin, a substance integral to the formation of blood clots. It also dilates the blood vessels to aid in blood flow. Cultures where hot pepper is used liberally have a much lower rate of heart attack, stroke and pulmonary embolism. Spicing meals with chili peppers may also protect the fats in blood from damage by free radicals.

The capsaicin in chili peppers gives peppers their characteristic pungency, producing mild to intense spice when eaten. Capsaicin is a potent inhibitor of a neuropeptide associated with inflammatory processes. Capsaicin is being studied as an effective treatment for sensory nerve fiber disorders, including pain associated with arthritis, psoriasis, and diabetic neuropathy.

Topical capsaicin is now a recognized treatment option for osteoarthritis pain. Several review studies of pain management for diabetic neuropathy have listed the benefits of topical capsaicin to alleviate disabling pain associated with this condition.

Hot peppers are full of beta carotene and antioxidants that support the immune system and aid in fighting off colds and flu. Research has found that nasal sprays containing capsaicin reduce congestion.Consumption of peppers also fights against 16 fungal strains by reducing fungal pathogens.

Capsaicin not only reduces pain, but its peppery heat also stimulates secretions that help clear mucus from a stuffy nose or congested lungs.

The bright color of red chili peppers signals its high content of beta-carotene or pro-vitamin A. Often called the anti-infection vitamin, vitamin A is essential for healthy mucous membranes, which line the nasal passages, lungs, intestinal tract and urinary tract and serve as the body’s first line of defense against invading pathogens.

Red chili peppers’ capsaicin stops the spread of prostate cancer cells through a variety of mechanisms, indicates a study published in the March 15, 2006 issue of Cancer Research.

Counter to popular belief, the capsaicin in peppers acts as an anti-irritant. People with ulcers have been told for years to avoid hot spicy foods, but research has revealed that peppers are beneficial to ulcers. It aids digestive issues such as healing an upset stomach, reducing intestinal gas, curing diarrhea and acting as a natural remedy for cramps. It does this by reducing the acidity in the digestive tract that causes ulcers. It also helps digestion by inducing saliva production and stimulates gastric juices.

All that heat you feel after eating hot chili peppers burns a lot of calories. Even sweet red peppers have been found to contain substances that significantly increase thermogenesis (heat production) and oxygen consumption for more than 20 minutes after they are eaten.

Adding chili peppers to routine diet could help reduce the risk of hyper-insulinemia (high blood levels of insulin) that is a disorder associated with type 2 diabetes. Moreover, chili’s beneficial effects on insulin needs increase as body mass index (BMI) increases. In overweight people meals containing chilies significantly lower the amount of insulin required to lower blood sugar levels after a meal, and increases the rate at which the liver clears insulin.

Due to the anti-inflammatory benefits of capsaicin, chili peppers can help prevent allergies and symptoms of allergies.

If you burn your mouth with too much chili and can’t take the heat, grab a glass of milk. A protein in milk called casein can help douse capsaicin’s fire.

Any cookies that may not be particularly necessary for the website to function and is used specifically to collect user personal data via analytics, ads, other embedded contents are termed as non-necessary cookies. It is mandatory to procure user consent prior to running these cookies on your website.